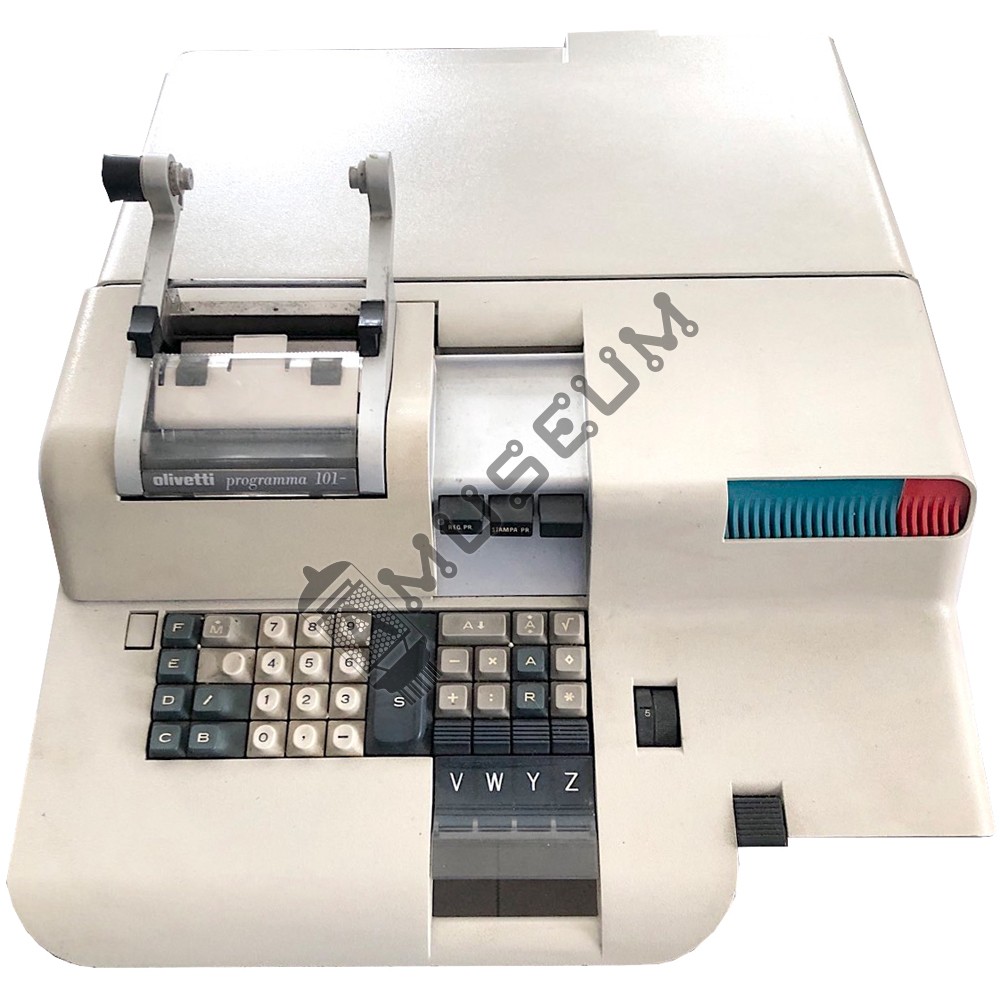 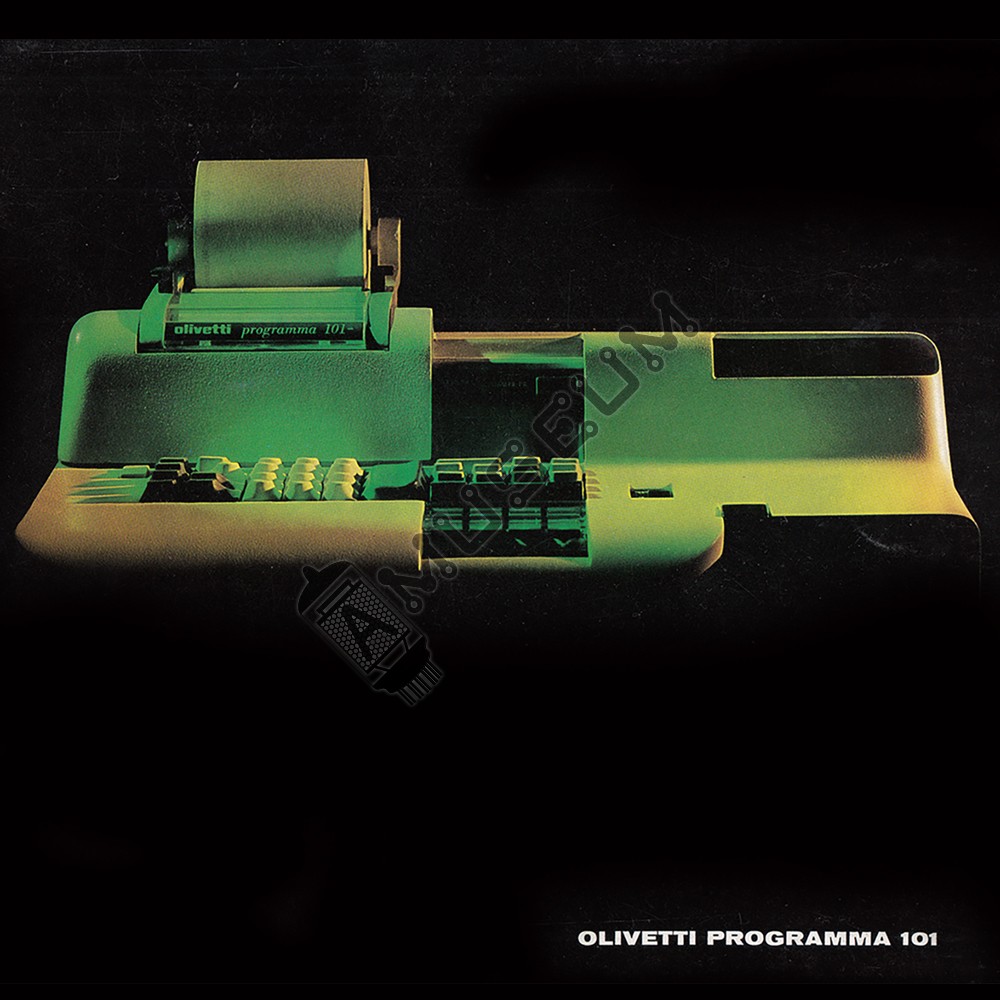 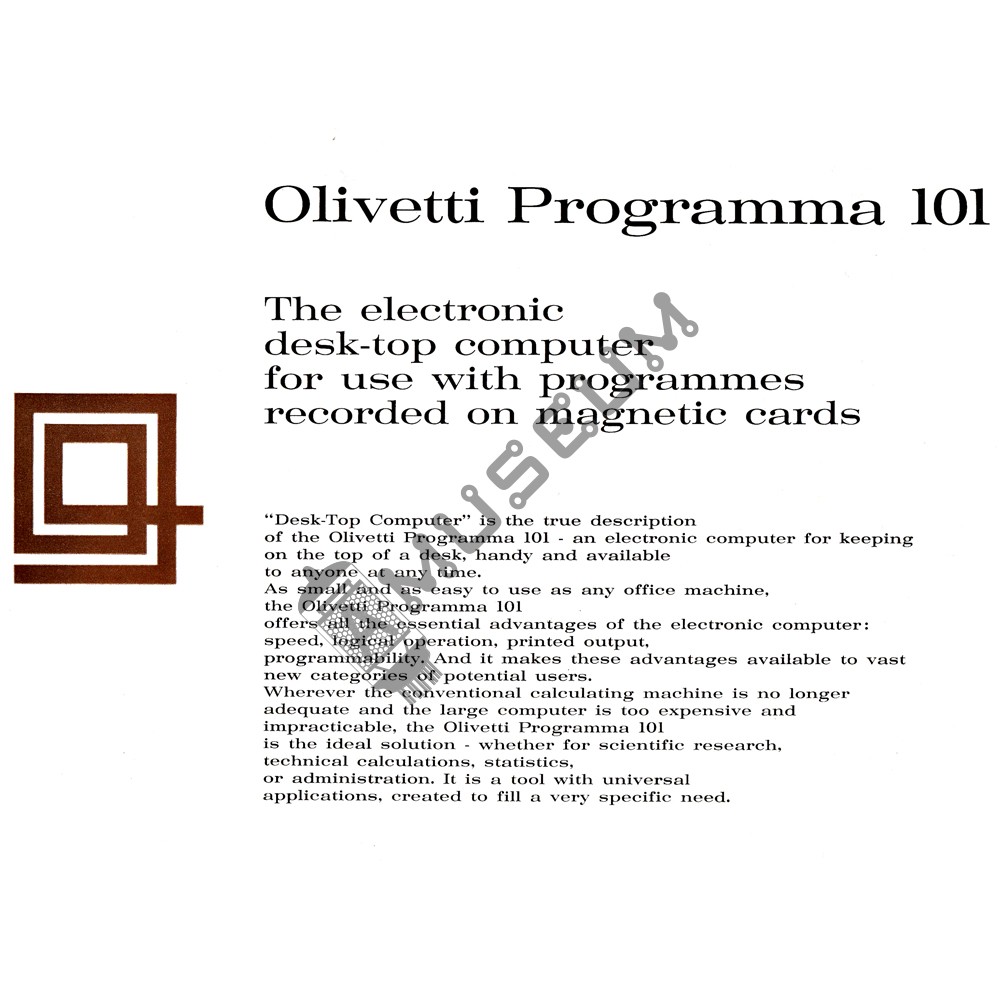 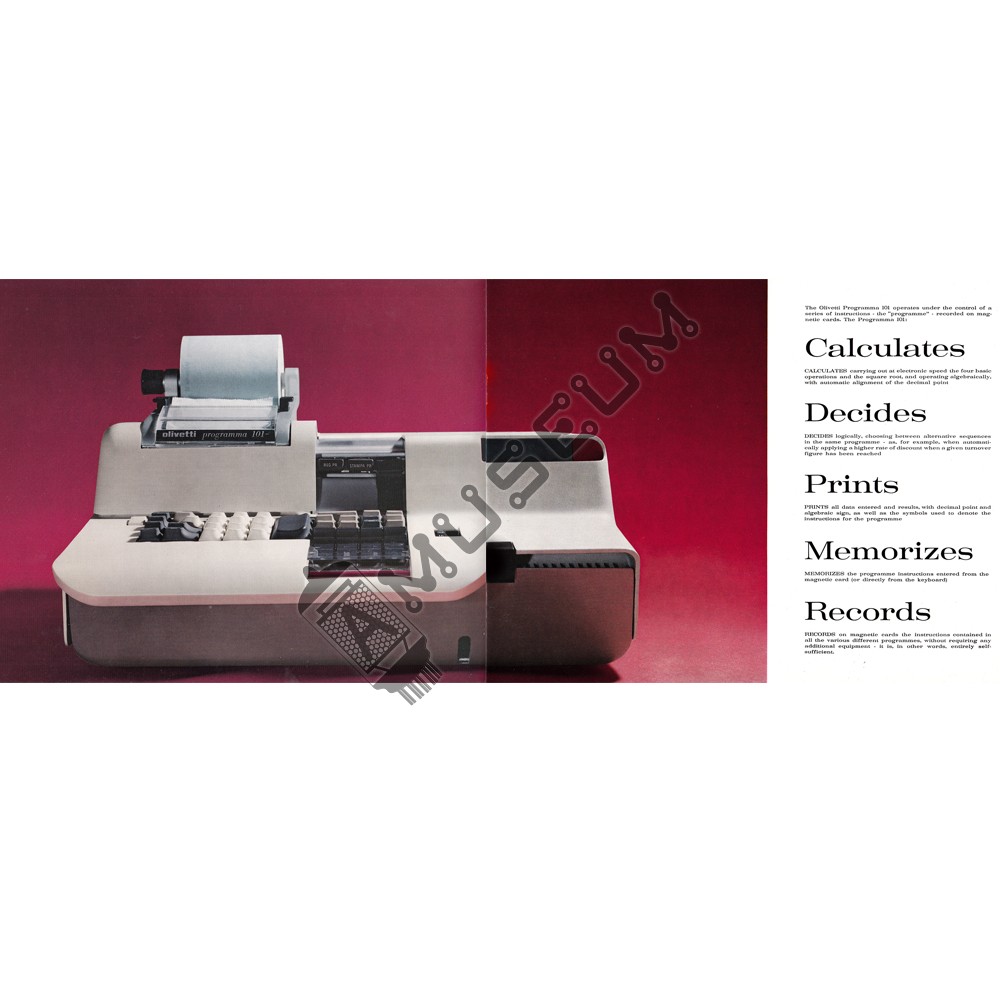 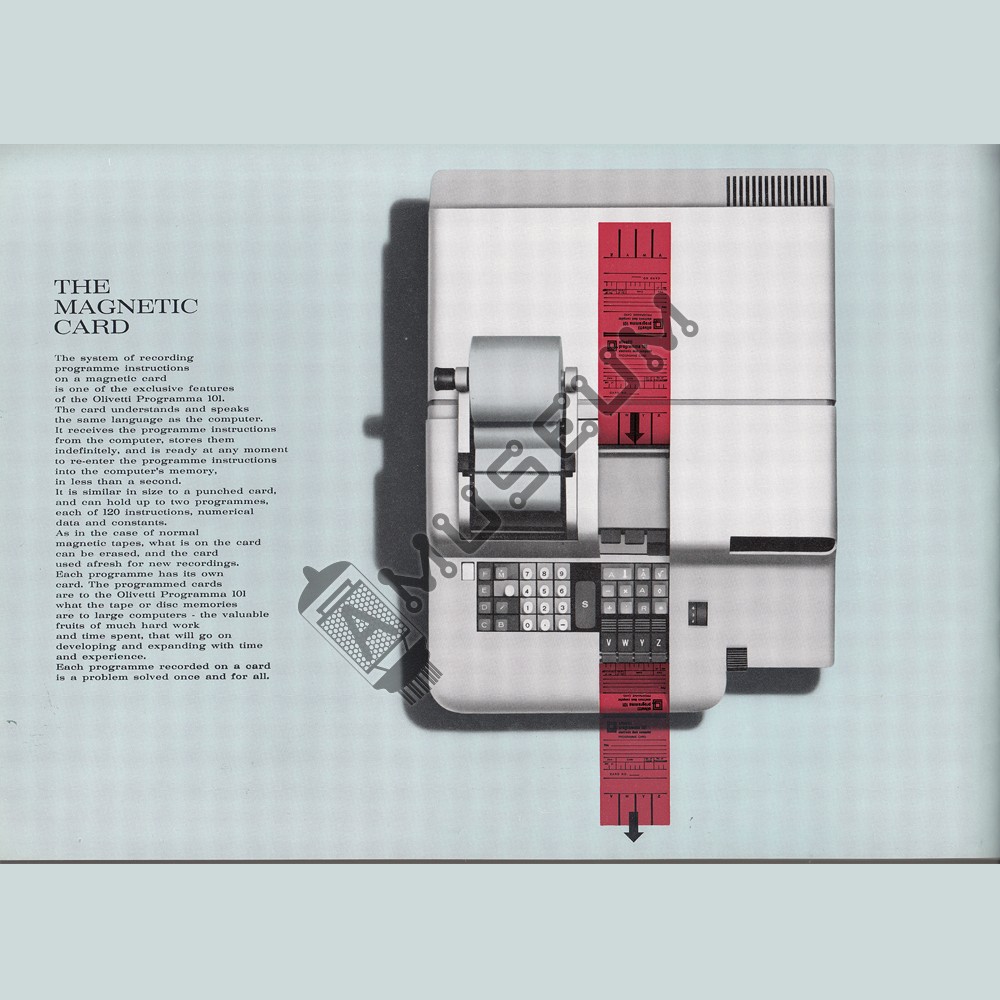 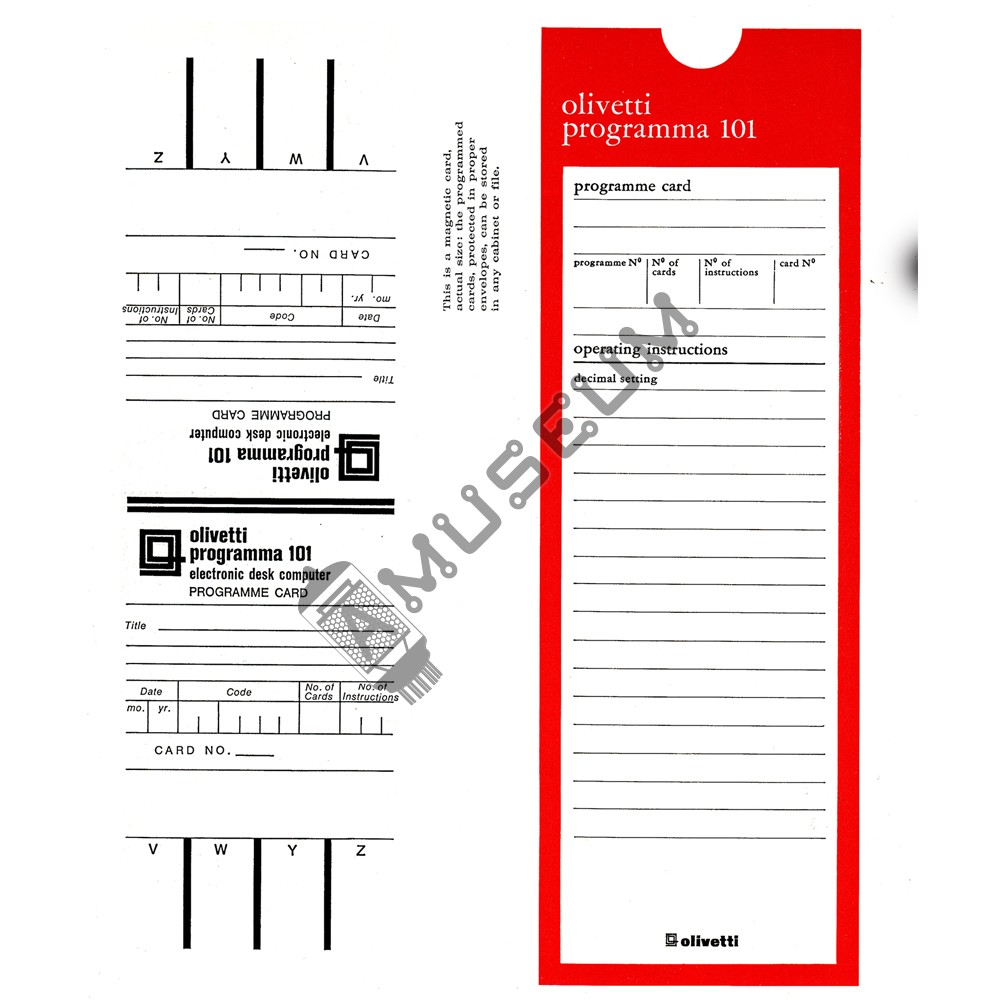 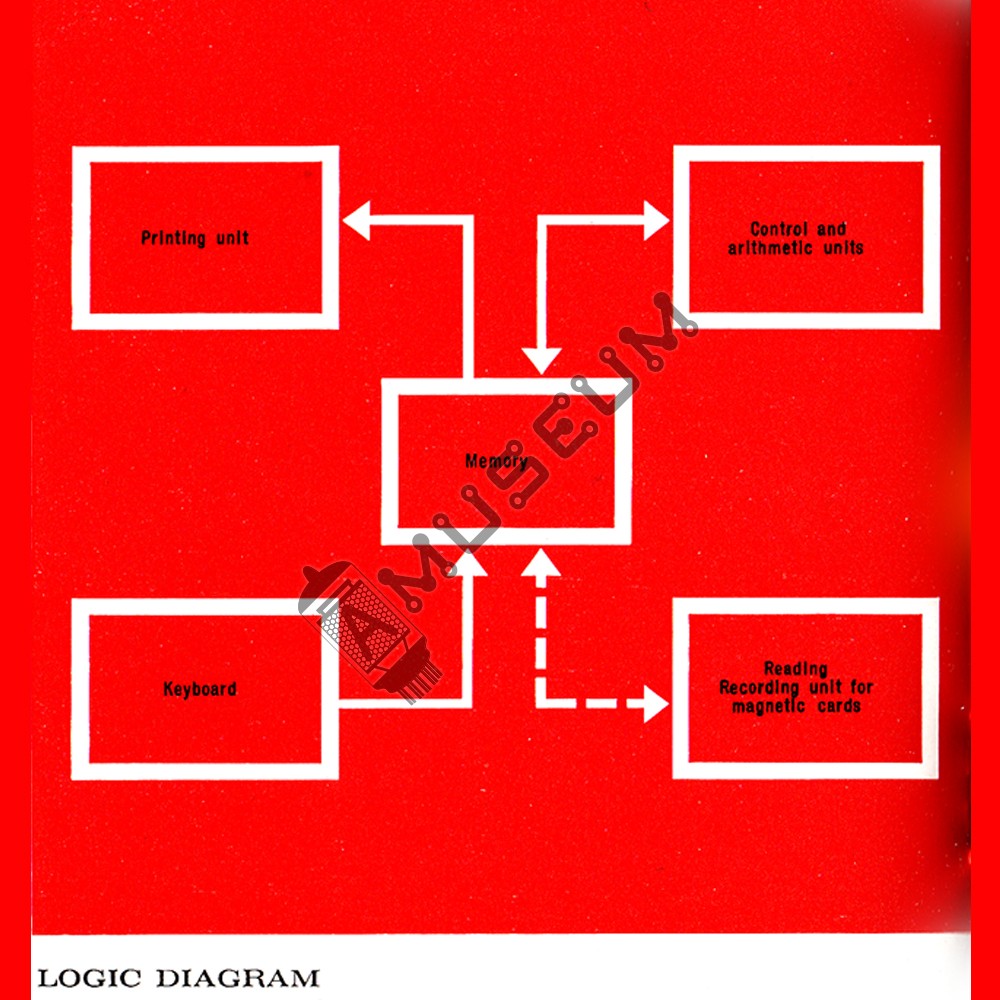 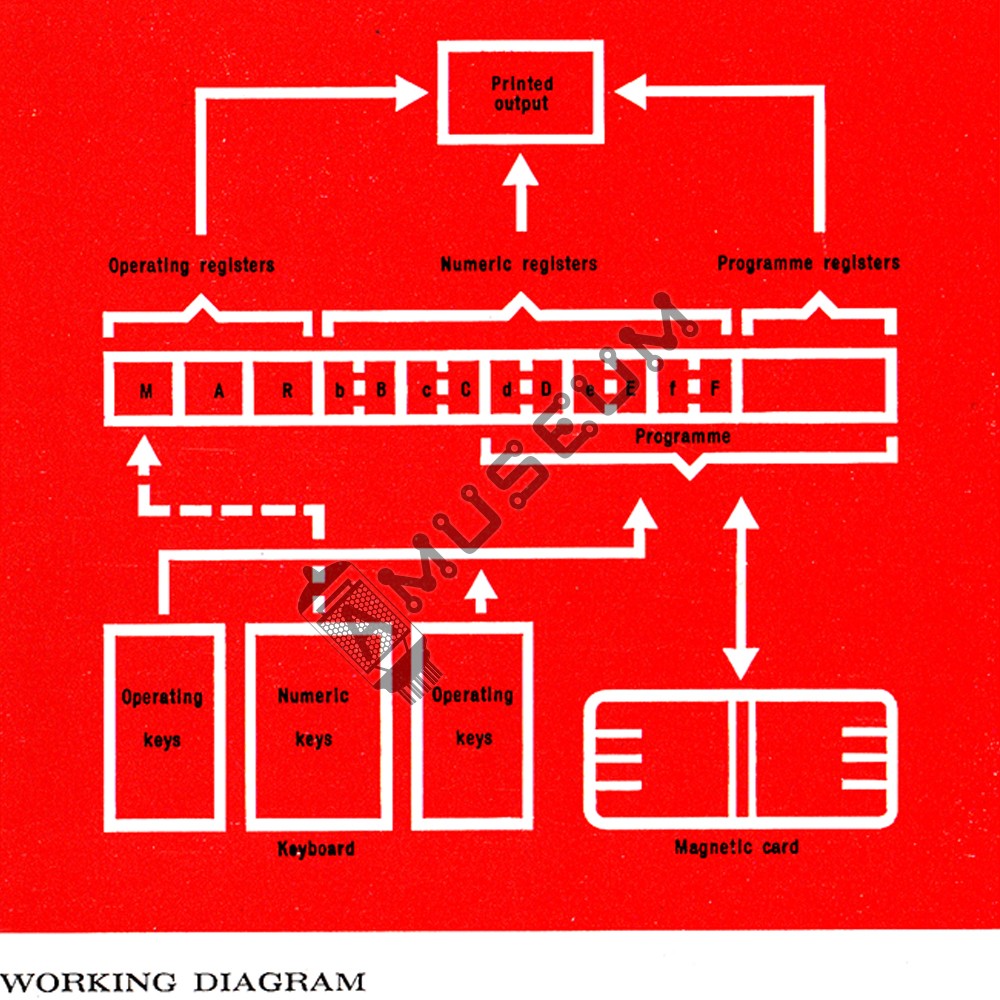 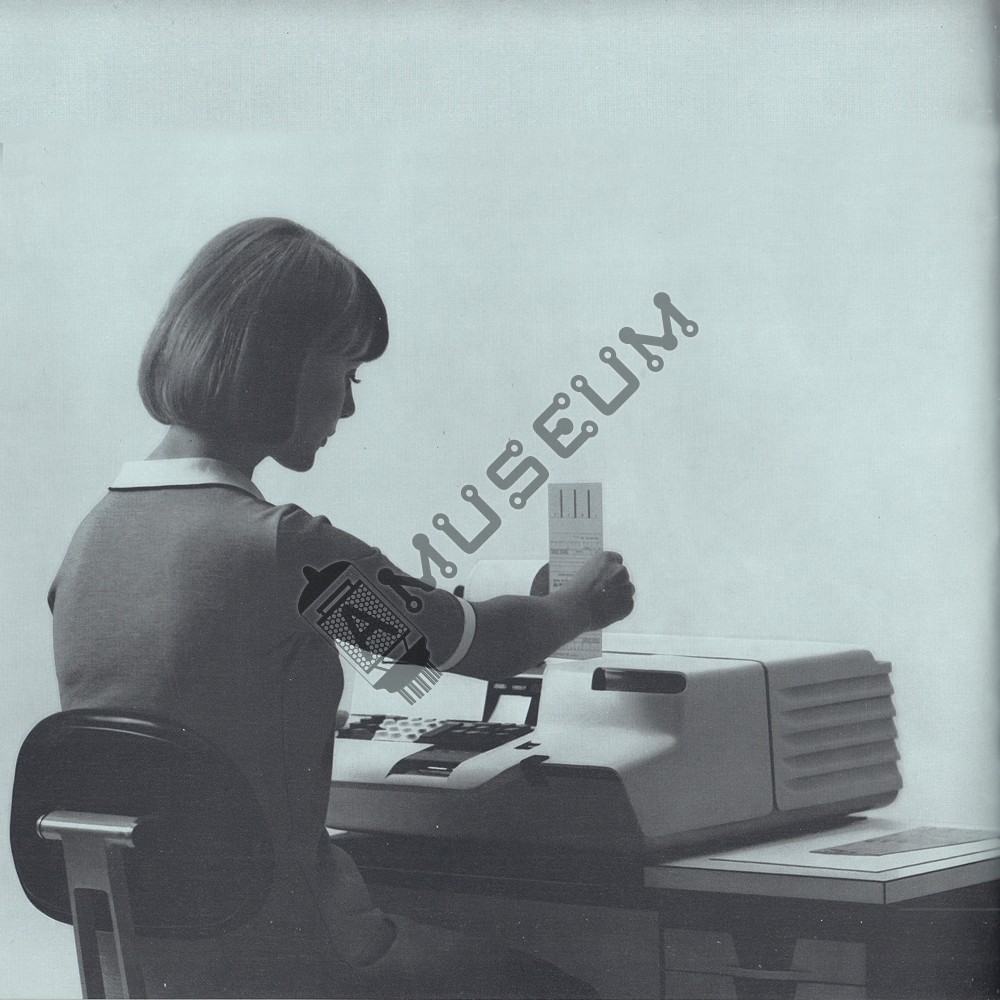 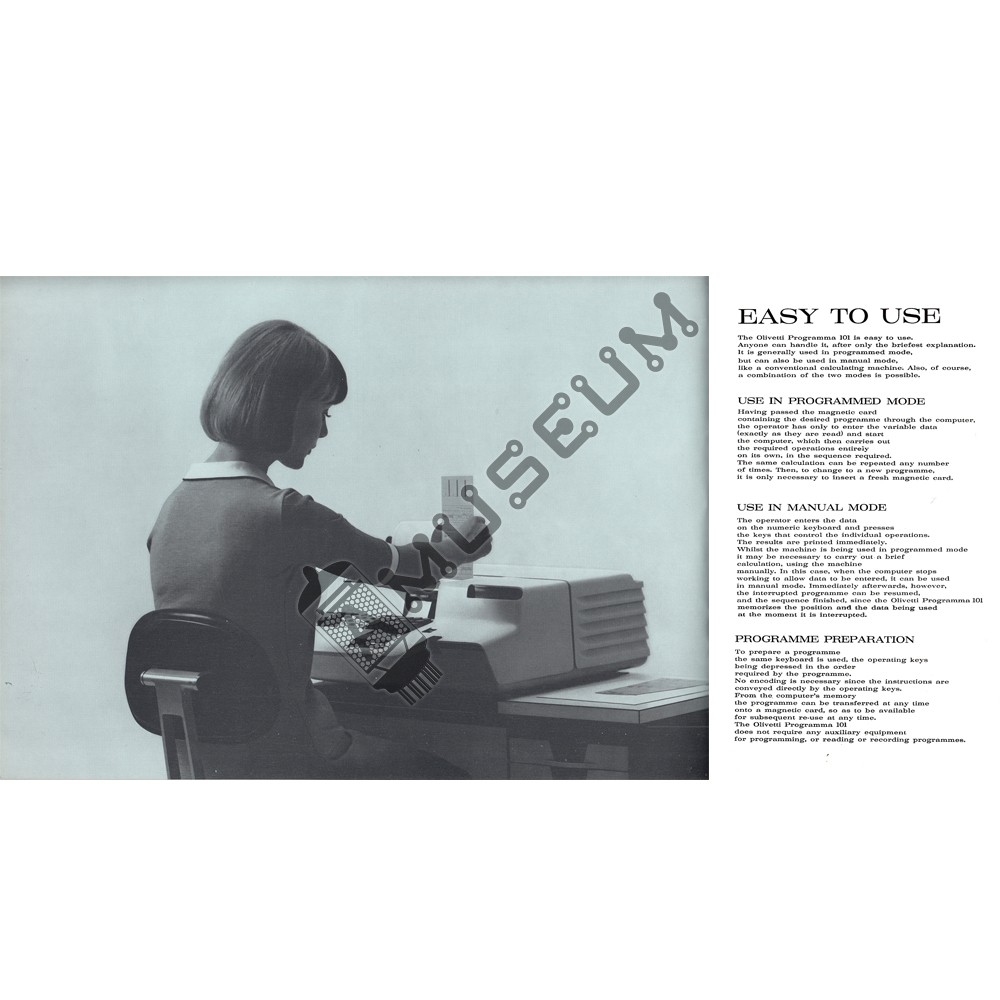 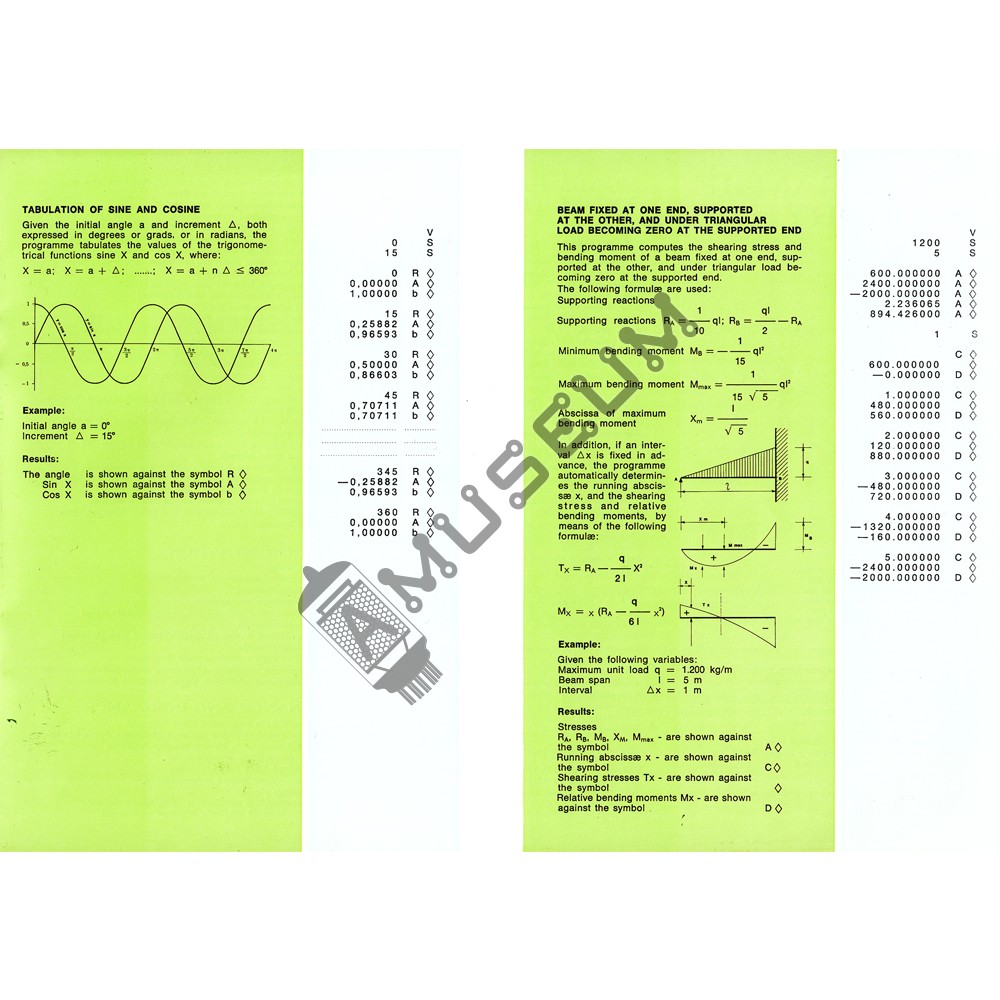 First desktop computer. Designed by Mario Bellini in 1965, it is still breathtaking piece of art.

All photos from official Olivetti brochure. I have the luck to present those images thanks to Dobrolyub Peshin, designer of many Bulgarian calculators, computers and many other machines. In 1968 Mr. Peshin has been invited to official reveal of Programma 203P, where been given whole set of printed materials, packed in a luxury leather case. Thanks to him we have the pleasure to enjoy these quality images.

Some of the texts from the brochure:

The electronic desk-top computer for use with programmes recorded on magnetic cards.

“Desk-Top Computer” is the true description of the Olivetti Programma 101 - an electronic computer for keeping on the top of a desk, handy and available to anyone at any time.
As small and as easy to use as any office machine, the Olivetti Programma 101 offers all the essential advantages of the electronic computer: speed, logical operation, printed output, programmability. And it makes these advantages available to vast new categories of potential users.
Wherever the conventional calculating machine is no longer adequate and the large computer is too expensive and impracticable, the Olivetti Programma 101 is the ideal solution - whether for scientific research, technical calculations, statistics, or administration. It is a tool with universal applications, created to fill a very specific need.

The Olivetti Programme 101 operates under the control of a series of instructions - the “programme” - recorded on magnetic cards. The Programma 101:

CALCULATES
Calculates carrying out at electronic speed the four basic operations and the square root, and operating algebraically, with automatic alignment of the decimal point

DECIDES
Decides logically, choosing between alternative sequences in the same programme - as, for example, when automatically applying a higher rate of discount when a given turnover figure has been reached

PRINTS
Prints all data entered and results, with decimal point and algebraic sign, as well as the symbols used to denote the instructions for the programme

RECORDS
Records on magnetic cards the instructions contained in all the various different programmes, without requiring any additional equipment - it is, in other words, entirely self-sufficient.

THE MAGNETIC CARD
The system of recording programme instructions on a magnetic card is one of the exclusive features of the Olivetti Programma 101.
The card understands and speaks the same language as the computer. It receives the programme instructions from the computer, stores them indefinitely, and is ready at any moment to re-enter the programme instructions into the computer’s memory, in less than a second.
It is similar in size to a punched card, and can hold up to two programmes, each of 120 instructions, numerical data and constants.
As in the case of normal magnetic tapes, what is on the card can be erased, and the card used afresh for new recordings.
Each programme has its own card. The programmed cards are to the Olivetti Programma 101 what the tape or disc memories are to large computers - the valuable fruits of much hard work and time spent, that will go on developing and expanding with time and experience.
Each programme recorded on a card is a problem solved once and for all.

EASY TO USE
The Olivetti Programme 101 is easy to use.
Anyone can handle it, after only the briefest explanation. It is generally used in programmed mode, but can also be used in manual mode, like a conventional calculating machine. Also, of course, a combination of the two modes is possible.